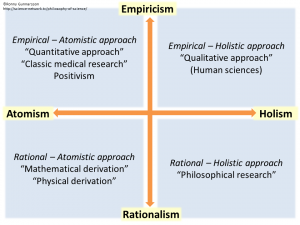 Let us start by explaining some words commonly used:

Qualitative methods is an ambiguous concept

The link between underpinning theory and empiric-holistic approaches

Research methods within the empiric-holistic (“qualitative”) paradigm has its roots more or less in philosophy, sociology and anthropology (se figure below). Phenomenology and hermeneutics are example of approached having a very strong link to philosophy of science and more specifically to the life world perspective first described by Edmund Husserl.

(* The figure above is adapted from Evelyn Hermansson at Gothenburg University, Sweden)

Differences and similarities between methods

Most analytical methods within the empirical-holistic paradigm have more in common than what separates them. Most methods in this paradigm are characterized by:

Analytical methods within the empiric-holistic paradigm differs in respect of:

Some methods in the empirical-holistic (qualitative) paradigm have a clear and well-described approach when analyzing collected data. Examples of such approach is grounded theory. Other methods are not as well defined, such as content analysis. Within the research methodology phenomenology there are different variants of how to analyze. If you say that you have used a phenomenological method, you should also specify in detail how you have done. Sometimes reference is made to previously described analysis models (for example, phenomenological approach according to Giorgi’s methodology).

Choosing the best approach – the chicken or the egg?

The best approach when choosing which method within the empirical-holistic (qualitative) paradigm that suits best is to first first look at the aim of the study. You can do that by looking at the questions posed within brackets in the overview below. Based on this choose which method best your research question. This is the ideal order of events in the research process.

It is quite common that researchers have a certain worldview and as a consequence are used to think within a specific paradigm. This may make them prone to stick to aims and research questions that is best answered by methods they are familiar with. A person who is well-placed in, for example, phenomenology is likely to get caught up in new issues that make it possible to choose phenomenology again. Thus, the interaction between aim/research question and selection of appropriate method is not always straightforward. Quite common a researcher choose aim and research question suitable for a specific method rather than the other way around. This is not necessarily bad but it might be good to be aware of the rationale for picking a specific method.

Below is an alternative grouping of qualitative methods (inspired by Anne Nyström, nurse and doctor of philosophy at Gothenburg University, Sweden):

** Action research has components of counting numbers and hence is not purely a method within the empiric-holistic paradigm.