You must cite this article if you use its information in other circumstances. An example of citing this article is:
Ronny Gunnarsson. Choosing statistical analysis [in Science Network TV]. Available at: https://science-network.tv/choosing-statistical-analysis/. Accessed January 26, 2020. 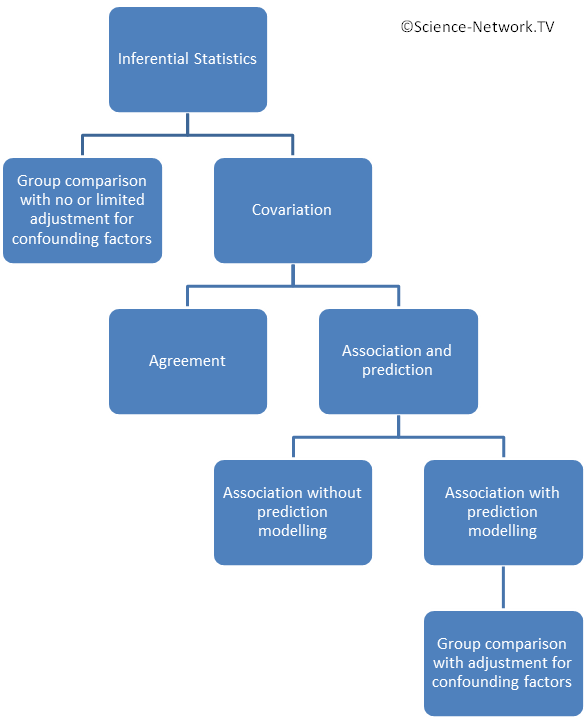 The alternative is to use a statistical method that can incorporate all variables in one go and tell the importance of them. You would do one separate analysis for each outcome variable (they would be labelled as dependent variable) and include all other variables (including group allocation) as independent variables. In the same example as above we would get 3*(1+1+1+1+1)=15 estimates such as p-values, odds ratios or hazard ratios. The magnitude of the adjustment for multiple testing you need to do for simultaneously producing 15 p-values is much less than if you produce 48.

The conclusion is that you should use simple group comparison if you have no need at all to adjust for confounding variables. This only occurs in the situation of a properly conducted randomized controlled trial. In all other situations (and also in some randomized controlled trials) you would be far better off choosing the approach of analyzing association using techniques also allowing the creation of prediction models (see below). This is very important in the case of retrospective studies (such as retrospective chart reviews) where confounding factors virtually always exists.

Randomized Controlled Trials (RCT)
The main purpose of the randomization procedure is to eliminate systematic bias. The main purpose with randomization is not to create groups that are similar at baseline. However, that is usually a desirable side effect of the randomization. A baseline difference can still occur by pure chance and it might be worth adjusting for that using statistical methods for “association with the possibility for creating prediction models” (see below). If that is done you would make group allocation to be one of the independent variables and the baseline variable where there is a difference between groups would be another independent variable.

The p-value for any baseline differences is usually not very impressing, rarely below 0.01. If you find a baseline difference with a p-value of less than 0.001 you would question the randomization procedure and in worst case throw the whole study in the waste bin. Statistical methods for simple group comparisons (see below) can usually be used if there are no baseline differences.

Sensitivity and specificity informs you about “the health of the diagnostic test”. Likelihood ratio informs how much more information was added by the test. Finally, predictive value of tests informs you about the health of your patients (if patients are at focus). Hence, sensitivity and specificity are of uttermost importance for manufacturers of diagnostic tests while predictive value of test are much more useful for health care staff.

Case control studies or cohort studies (often conducted as retrospective chart reviews)
A common situation is that you want to know if a new treatment (or routine) is better than the old one. Let us discuss some examples. The first example is a hospital clinic that changed their approach to keeping the vascular access open in patients with end stage renal disease. Keeping the vascular access open is essential for dialysis to work. You are given the task to compare the outcome before and after as a proof that one approach (hopefully the current) is better than the other. Another example could be that patients with type two diabetes for various reasons are given different drug treatments. You are given the task of investigating if patients given the new drug A has a better outcome than those getting the traditional drug B. Both these examples has some common features. None of them are a randomized controlled trial. They are both usually conducted as retrospective chart reviews (or at least part of the data collection is retrospective). The main problem is that patients are not randomized to the different treatments / approaches. The consequence is that you end up comparing two groups that may not be comparable. Any differences in outcomes may be due to these differences rather than the different treatments. It is likely that the latter situation with diabetes will suffer more from this problem than the first situation with end stage kidney disease where all patients are swapped over. This problem cannot be completely eliminated and this design will be considered as a vastly inferior design compared to a proper randomized controlled trial. However, retrospective charts are data that are usually easily accessible and almost just waiting there so these types of studies are common. It is important to realize that a simple group comparison with no or limited adjustment for confounding factors is insufficient. The best approach is to use statistical methods for “analyzing association with the possibility for creating prediction models”. These methods allows adjustment for known confounding factors. It is of course difficult to adjust for unknown confounding factors. Example of suitable statistical methods are unconditional binary logistic regression, multivariate linear regression or propensity score matching.

Establishing an association with the possibility for creating prediction models (prospectively or retrospective)
It is very common that you want to predict the probability for or time to an event. What you want to predict will be your outcome variables. It might be death, deterioration, improvement, quality of life etc. You would look at a number of other variables that correlates with your outcome. You need to do this separately for each outcome variable. You would likely want to use logistic regression in case your outcome variable is binary. If it is time to an event you would typically choose Cox regression.

Estimating associations are usually a good alternative to do a case-control study. Group allocation would in such cases be one of several independent variables. The interpretation of the outcome is not cause-effect but rather associations where the cause-effect needs to be clarified in proper randomized controlled trials.

Analyzing agreement (evaluation of a diagnostic test)
You must cite this article if you use its information in other circumstances. An example of citing this article is:
Ronny Gunnarsson. Choosing statistical analysis [in Science Network TV]. Available at: https://science-network.tv/choosing-statistical-analysis/. Accessed January 26, 2020.