You must cite this article if you use its information in other circumstances. An example of citing this article is:
Ronny Gunnarsson. Logistic regression [in Science Network TV]. Available at: https://science-network.tv/logistic-regression/. Accessed January 23, 2020.

The concept of logistic regression

X represents the different independent variables and b their respective beta coefficients. Possible different situations within the concept of logistic regression are:

Why logistic binary regression is useful

Let me explain the latter using an example. Assume we want to know which variables differ between two groups, those who have experienced an illness compared to those who has not (or it could be those who say yes to a question compared to those who say no). Also assume that we want to investigate 50 different variables, some being categorical while others are continuous.  Using chi-square or t-test to compare the two groups would result in 50 p-values, some below and some above 0.05. However, a p-value below 0.05 can occur by chance. To compensate for the possibility of getting statistical significance by pure chance we need to lower the limit where we consider a statistical finding as significant. There are multiple ways of doing this. Just as an example using the simple Bonferroni adjustment means that only p-values below 0.001 should be considered as statistically significant. A consequence is that very few or none of the calculated p-values would be considered as statistically significant.

Using logistic regression as described below reduces this problem. We would first use some technique as a sorting mechanism to decide which variables to put into the second step, a multivariable regression. A common scenario is to start with 50 independent variables. It is reasonable to believe that 2-5 variables remains statistically significant in the final model. Assume that we finally get 5 p-values (with odds ratios). According to Bonferroni any p-value below 0.01 can now be considered as statistically significant. Consequently we have substantially reduced the problem with multiple testing.

How to do it

Ensure that all variables are coded so interpretation of the outcome is facilitated. If you have a class variable (categorical variable) ensure that coding is sensible. If one variable is ethnicity then the question is if you should have one option for each possible alternative or merge them into fewer groups. This depends on your focus and how the individuals relates to the different options. It might be worth considering if merging several alternatives in categorical (class) variables into only two values/groups might facilitate interpretation of the outcome.

This describes how to build a model, as described in 4A above, in SPSS:

This describes how to build a model, as described in 4C above. This procedure can start with many independent variables (no direct upper limit) and gradually eliminate the ones of lesser importance. This procedure is also labelled as a fishing expedition. Nothing wrong in that but, important to maintain a suspicion towards statistically significant findings that seems peculiar. Many statistical software packages have automated procedures for this. One alternative to do this is by multivariate stepwise logistic regression. This exists as three versions; Forward inclusion, backwards elimination or stepwise (using both forward inclusion and backwards elimination):

Criticism has been raised both against using simple regressions and stepwise regression procedures as described above since this may end up with a final model that is not the best one.

Evaluating and validating your new model

The most commonly used measures of model validity are Nagelkerke R square, Receiver operating curve analysis (ROC) analysis and Hosmer and Lemeshow test. Measures to estimate “Reclassification” and “Clinical usefulness” are more recent inventions and hence not yet used a lot . All of the above tests for model validation can be applied slightly differently:

Interpreting the outcome of logistic regression 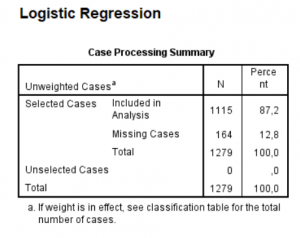 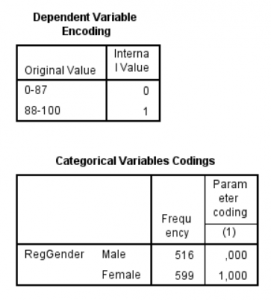 Coding of dependent and variables measured with a nominal scale

It is possible to understand the result once the above is clarified. Have a look at the image below. B is the beta-coefficient (similar to the one in standard linear regression). The beta coefficient can assume any value from negative infinity to plus infinity. The B-coefficient is also transformed to an odds ratio and this software (SPSS) labels it “Exp(B)”. The Odds ratio will be 1.0 when the B coefficient is zero. The two columns to the right are the 95% confidence interval for the odds ratio. From this we can make the following interpretations:

Please have a look at this video from the National Centre for Research Methods (NCRM) hub at the University of Southampton, UK. It explains the output from another project:

Examples of presenting the outcome of logistic regression

Results from multivariable binary logistic regression should always be presented in a table where the first column lists all independent variables evaluated, the following columns presents the outcome of the regression. However, if data are suitable they may also lend themselves to be presented as a user friendly look up table or probability nomogram. Look up tables might be a good option if you only have dichotomous independent variables remaining in the final model. Probability nomograms are often a good option if you have only one continuous variable remaining in the final model (see examples below). If you end up in a final model with multiple continuous variables the options are:

Practical examples of presenting the outcome from multivariate logistic regression: