You must cite this article if you use its information in other circumstances. An example of citing this article is:
Ronny Gunnarsson. Randomization [in Science Network TV]. Available at: https://science-network.tv/randomization/. Accessed January 23, 2020. 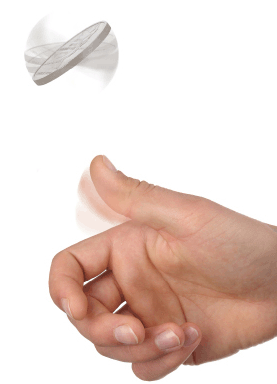 This page does not talk about random sampling but rather allocation of participants into groups. This is commonly used in experimental studies. The advantages of using random allocation to groups are :

The main types are “Simple randomization” and “Restricted randomization” . Every new participant has an equal chance of being allocated to the available groups in simple randomisation. Simple randomization may sometimes allocate almost all participants to one group and almost none to the other. This is rare but can happen. One of the oldest forms of simple randomization is to toss a coin. However, that method is not recommended any more. It seems that tossing a coin may not be as random as we think . It is much better to use random numbers generated by Excel or by another software.

A handy side effect of randomisation is that groups often become similar and comparable. This is not an aim of the randomisation but a natural consequence. However, sometimes groups differ at baseline. Previously it was argued that it was an important part of the analysis of data to compare groups at baseline. The main purpose was to:

Check if randomization worked as intended

Previously it was considered important to check that the randomization worked by comparing baseline differences. A more modern approach is to say that this is not required anymore for the following reasons:

Does a perfect description of seemingly trustworthy randomization and concealment ensure that it was a true random group allocation? Yes according to CONSORT . If in doubt an analysis of baseline differences might sometimes give a clue. As mentioned above a reasonably small difference in baseline (P>0.001?) might occur by chance and as such might be OK but a larger difference (p<0.001?) may suggest that the intended random group allocation may not have worked as intended in reality. In a randomized controlled trial including 11,018 patients the two groups had different blood pressure at baseline :

The two groups were similar in other variables but differed for blood pressure. The difference in blood pressure may be perceived as small. However, the major question here is not if the difference in blood pressure could have influenced the outcome. The main question is if this absurdly low p-value (unlikely to happen by chance) may indicate that the group allocation did not work as intended in reality and that there is an unknown selection bias at play. If that would be the case it would also opens up for the possibility that there might be other confounding factors at play that have not been adjusted for and we can’t for certain rule out the possibility of a type I error. Please note that this study published in 1999 is not necessarily better or worse than other studies. It is merely used as an example. The point is that with the new recommendations a baseline comparison may not be done and we will never know if there might be a potential problem despite describing a proper random allocation procedure.

It can be debated if refraining from checking for baseline differences (as currently recommended) is a good practice. As with much else there is no given truth, only opinions, choices and consequences.

Identify variables that needs to be adjusted for

Adjusting for factors correlating to the outcome of the study is likely to provide a better estimate of the true effect of the intervention . Please note that this is something else than checking if randomisation worked as intended.

Variables likely to influence outcome should be selected well before before data collection (and described in the study protocol). This choice of predefined confounding variables is made without the knowledge of any baseline differences and they are included in the statistical analysis even if there are no baseline differences on group level .

There are a few different pathways to statistically analyse the effect size investigated in randomized trials. Read more about this on the page Intention to treat / Per protocol.